Home Installer Corner The benefit of retrofit: why we must improve our housing stock

The benefit of retrofit: why we must improve our housing stock

Russell Smith, founder of RetrofitWorks, explains why upgrading the UK’s poorly-performing housing stock is vital in keeping global warming at bay and how installers are key when it comes to spreading the word.

“You’d have to be a complete hermit not to realise that climate change is here,” says RetrofitWork’s Russell Smith ­– as we discuss the events of the past 12-months alone. From the devastating Australian bush fires, to record-breaking heatwaves here in Britain, the daily effects of climate change are increasingly evident and the UK’s energy-guzzling, fossil-fuel-burning housing stock will continue to play a key role in this catastrophe, unless swift action is taken. 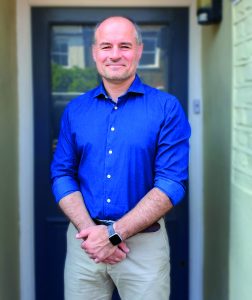 While coronavirus continues to wreak havoc throughout our society, Russell warns that the challenges it brings will pale into insignificance when compared to the environmental emergency that lies ahead. “I can assure you that Covid is nothing compared to the climate change impacts that are coming around the corner,” he says.

The UK has committed to bringing all greenhouse gas emissions to net zero by 2050 but if the nation’s existing homes are not improved, through retrofit, to make them more environmentally friendly, we will never reach the climate goals required to keep the earth’s temperature below the tipping point to avoid ecological disaster.

“We’ve got to decarbonise our society in the next 20 years – absolute maximum…,” says Russell. “We have got to completely change the way we live in order for this to work and that is a difficult thing for everyone to swallow.”

“If you look at the carbon dioxide emissions that contribute to climate change, the biggest proportion is emanating from buildings and around 35% is houses… so it’s absolutely critical that we come up with a compelling model [to remedy this].”

While measures to reduce household energy consumption, in the form of heating or cooling for example, are an obvious solution, Russell explains that every home needs to reduce its need for energy in the first place. This requires a whole-house approach where the building fabric – including the fenestration and the elimination of issues such as draughts – is critical. “Windows and doors are up there, they have a big impact,” he says.

Russell is founder and managing director of environmental consultancy, Parity Projects, and the not-for-profit, ethical co-operative, RetrofitWorks. The latter came about when a group of contractors, keen to help improve the energy efficiency of the UK’s housing stock but frustrated by the way they felt the Green Deal had been designed to give large companies control, were in Russell’s words “looking for a better commercial model”.

Under RetrofitWorks, a ‘retrofit coordinator’ will issue a prioritised and phased whole-house plan, incorporating all the things that need to happen to that house to reduce energy bills and get carbon emissions down to zero. This “jig-saw” approach is designed to ensure that works carried out at the outset do not block further improvements that may be required later down the line.

“We’ve ended up with a model that local authorities, community energy groups etc, are working with to provide a mechanism in their area to get householders to do more [to decarbonise their homes],” says Russell. “I’m doing all this because of climate change. I’m doing this because we need to renovate 27 million buildings in the next 10 years.”

With housing playing such a vital part in the fight against climate change, Russell is keen to emphasise the “major role” of installers and contractors in spreading the word on the numerous benefits of retrofitting.

“They might think ‘well it’s not by job, mate’,” he says, “[but] actually, they’re the ones, on the whole, that homeowners are listening to.

“Rightly or wrongly, consumers trust contractors to give them advice. If I had the money, I’d be renovating the house of every contractor in the country, showing them how to do it and the benefits… and I can assure you they’d be absolutely convinced, from day one, that they should be doing this for everybody they are working for… If I had a couple of billion, I’d [renovate the homes of] all the people going through college, all the 56 year-old plumbers… because they are the messengers.”

While lack of trust has been a barrier to home improvements in the past, RetrofitWorks sets out to do “all the due diligence”, providing peace of mind for both installers and their customers.

But it’s not just a lack of trust that has been a barrier to improving our existing housing stock. According to Russell, there are three main issues: “One, is householders don’t even know [retrofitting to decarbonise their homes] is ‘a thing’,” says Russell. “What we have been lacking is a national programme that shows there’s a huge amount you can do for very little.”

Secondly, says Russell, it’s about values. “At this moment in time, people are not valuing this stuff…. they are not thinking – ‘ethically, I really ought to be doing that…’ or ‘why aren’t I future-proofing my house?’. As soon as it’s normal, they will value it.”

The third issue is money and as Russell points out, this is also linked to values. “People are prepared to spend 15-20 thousand pounds on kitchens” he says, “but they’re not prepared to [spend money on putting] a bit of insulation in.”

While Russell points out that the government has clear policies surrounding the new-build market “with established supply chains to get the work done” in line with targets and regulations to reduce the environmental impact of our housing stock, dealing with individual householders can be “messy” in comparison. This lack of a “joined-up” approach to retrofitting is where RetrofitWorks can help. “Designing whole-house retrofits is hard and we want to take that tricky bit away from the industry, or work with them to do that part for them…” says Russell.

With normalising the concept of retrofitting key to increasing its value among consumers, Russell believes same goes for installers and the retrofit industry at large – and the solution lies in “retraining the entire retrofit sector”.

However, he says, it’s not about skills – but knowledge. “It’s the knowledge to know that you are doing things right.

“It’s about trying to create a safe space for companies to do the innovation and to change – and we might even have to start paying people to be in the classroom to learn… or we have to train them on the job… perhaps with mentor-contractors… there is so much work to do… We don’t need to worry about competition anymore!”

Calling for a substantial national retrofit programme, Russell is concerned that “if we don’t get that strong signal now, we’re not going to achieve our goals.”

Referring to the government’s latest retrofit home improvement scheme, launched in part to kick-start the economy following the Covid-19 lockdown, and set to run for just six months, Russell said: “The immediate impetus is this Green Homes Grant and I do worry it’s been designed for a very few companies that have ticked some boxes. I worry that the quality of the work is going to be a problem. I hope not – if you want come to RetrofitWorks, we will avoid all of that entirely, but [at the time of writing], I’m still not sure whether we are going to be a part of it…”

It is clear that when it comes to transforming the UK’s poorly performing buildings, there is no quick fix and Russell is keen to get the message into the mainstream.

Key to building momentum for the cause is the participation of smaller installers, dotted around the country. “They’re authentic, they’re local, they’re not going to want to damage their good reputation,” says Russell, “so if we can allow them to be part of this, I think that’s what’s going to get this market moving.”

RetrofitWorks currently operates in London, Oxford, Sussex, soon to be moving out to Cambridge and Manchester. If you are interested in finding out more, visit https://retrofitworks.co.uk/

“There is clearly a journey ahead where there...

‘The green light for the window and door...