Home News Was the Kickstart scheme a missed opportunity?

Three months after the deadline passed for hiring unemployed 16-24 year olds under the government’s much vaunted Kickstart scheme, the award-winning installer The Window Company (Contracts) has asked why a scheme with so much potential to attract new young talent into the industry failed to deliver in anything like the numbers it promised.

Kickstart provided employers with 25 hours a week of subsidised wages at National Minimum Wage for 6-month work placements and £1500 towards providing employability training, yet only 100,000 of the 250,000 targeted places were filled by the March 31 cut-off date.

The Window Company (Contracts) took on Oliver Dixon and Adam Harman under the Kickstart scheme at the start of the year and, at the end of their six months, both have now been offered permanent jobs as Trainee Window Fitters.

Katie Thornton, Director of Compliance and Administration at the Chelmsford-based commercial installation business said Kickstart was the ideal way to give Oliver and Adam a taste of the industry and see whether they had what it takes to build a successful career.

She explained: “We provided a comprehensive training programme which included: manual handling, working at height, asbestos awareness, and loading and unloading and that would have benefited them even if they hadn’t stayed with us. However, both fitted in from the very beginning and showed the kind of commitment and enthusiasm which meant we were delighted to offer them permanent roles.

“We would have been willing to deliver multiple cycles of Kickstart placements as the scheme really worked for us. It certainly had the potential to become a pipeline to attract young people who might never have considered a career in fenestration onto apprenticeships or higher-level training courses. However, it has been replaced by a Way to Work employment matching scheme, which carries none of the subsidies or training grants which made Kickstart a useful way of giving young people on Universal Credit a real chance.

“In terms of timing, it was obviously difficult for some employers to offer Kickstart placements while lockdown restrictions were still in place, and I know some struggled to attract youngsters who had been long term unemployed, but others were simply not aware of the potential benefits. Closing the scheme early, when we were still in the midst of a skills shortage, seems like a real missed opportunity”

Oliver Dixon would certainly agree. He said: “I’m really excited to have this opportunity to train for a long-term career. I’m learning new skills every day. I can already see myself, in five years or so as a lead fitter, leading a professional and productive team on a full house install.” 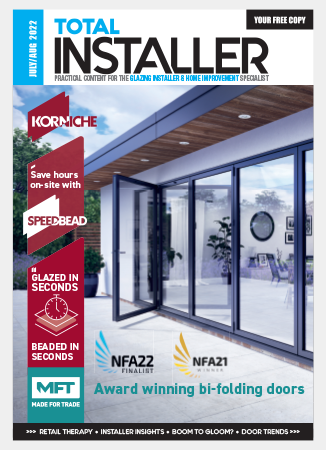